Documents must go through an approval process before they are released for use.

Documents start in Draft. When the Editor thinks the document is ready for release, it is submitted for review and moves to Pending. If the document is acceptable, it will be Released.

In the Document Register you'll see the current state of each document.

In the list of documents above, "PRO-077 Cleaning Protocol" is only in draft and has no content available to system users (only shows a green "D"). The document "Purchasing Approvals" also has no content available for system users, but is pending review (orange "P").  Both "POL-03 Quality Policy" and "PRO-22 Bottle procedure" have released versions available (blue "R").  One of the released documents - POL-03 Quality Policy - also has a new version pending review (it shows both a blue "R" and a yellow "P").

Only certain Roles can see the document before it has been released.

For each document you nominate one Editor (who can make changes), one Approver (who will approve and release the document, and any number of Reviewers (who can view the pending document in order to comment on it.) 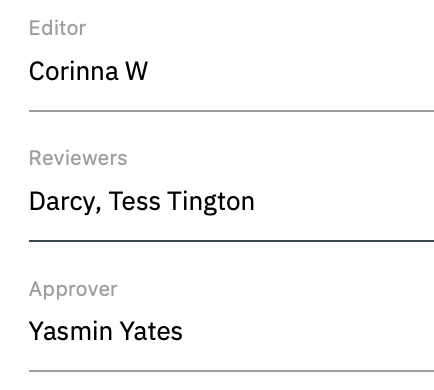 When a new version is approved, the previous released version is automatically archived and hidden.
Last updated on December 14, 2020